Big Apple Circus is back in NYC!

Posted on December 4, 2017 by valeriegerstein 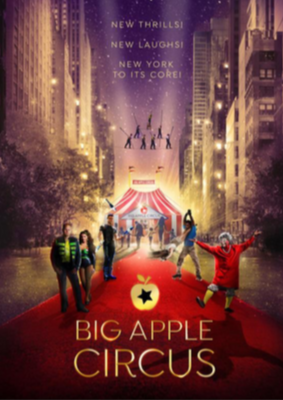 When my kids saw the Big Apple Circus tent being built again in Lincoln Center, they begged to see the show!  After all of us being so sad about the news that it was shutting down, the sight of the big, blue tent was the topic among their friends for weeks!

We just went to see the circus.  They said it was the BEST show they’ve ever seen there.  It was a funny thing to hear since we recognized many of the same performers as in years’ past.  The seating was the same, the format was pretty much the same… but perhaps the thought of almost losing the circus made this year feel that much more special!

Grandma was a new addition for us.  They cracked up during the silly water scene with Grandma.  We also went with our dear family friends who have a child with autism.  The Big Apple Circus has, historically, offered special shows for children with a variety of special needs.  Seeing the circus while watching him made the acts that much more special.  The slapstick humor of the water being thrown from one clown to the next and his reaction to it made me – all the adults – laugh that much more!  I highly recommend taking children of all ages and all perspectives to see this show.  We were left wanting more.

The show is running at Lincoln Center now through January 7th. It’s the 40th season of the Big Apple Circus.  Celebrating that milestone and knowing that the Big Apple Circus almost ended for us is a grand reason to go and show your support.  The children – and their parents, grandparents, aunts, uncles and cousins, can make this a tradition that will continue.  The fact that Ringling Bros. and Barnum & Bailey®  circus is no longer performing for audiences proves that there is a threat that this is an end of an era of circus performances.  Maybe there are politics… and maybe there are opportunities for smiles and appreciation for the simple things in life.

All the seats are great! I suggest getting there early so you can see the ornate cossets they have on display in a “museum” on your way into the tent.  It was hard to choose our favorite costume – and our favorite act. They kept us on the seat of our chairs as we were rooting for them to execute their difficult acts.  Sometimes they didn’t do it – which made us love it event more.  They are talented and they are human.  We cheered them on to try again and that made the experience relevant for us and the kids.  We all have to practice, like the performers, to get better at anything we attempt.  Sometimes we fail but we try, try again.  It was such a memorable year to be at the Big Apple Circus. I highly recommend you make it a tradition with your family as it is with ours!

A former online media professional, I am home, on the Upper West Side, with my 2 gorgeous girls, Mia and Liza and their wonderful Daddy, Mark.
View all posts by valeriegerstein →
This entry was posted in Uncategorized. Bookmark the permalink.